We have started challenging ourselves to find new ways to give back to each city we visit.  The timing was right for us when we arrived in Fargo, North Dakota.  We would have the opportunity to be part of the Special Olympics Opening Ceremony.  The 2016 summer games program for the Special Olympics North Dakota Opening Ceremony was to be held for the first time at Fargo Civic Center on June 9, 2016.

We were honored to be included and lend a helping hand.  The actual games would be held June 10th and 11th at Davies and Fargo High School.  Approximately 500 individuals with intellectual disabilities will compete in aquatics, bocce, powerlifting, track and field, and volleyball.

Upon arriving we had the pleasure of getting to know DJ who has been part of the games in Fargo for 19 years.  They were originally held north of Fargo in Grand Forks until a terrible flood forced them to move to Fargo in 1997.  They moved six days before they were supposed to be held.  DJ was instrumental in making sure it still happened and continues to volunteer each year.  Games and events like these bring attention to the unfortunate treatment of those with intellectual disabilities.  Their goals are to change these attitudes and provide justice to those with disabilities.

The job we were given for the opening ceremony was to give out meal tickets for free hot dogs until supplies ran out.

I swear we have a sign on our foreheads that say, “these gypsies are foodies!”  We seem to be given the jobs involving food more often than not.  A dj played music while fans played corn hole.

By 6:30 p.m. the Special Olympics Law Enforcement Torch Run Flame of Hope came running down Main Street all in black. 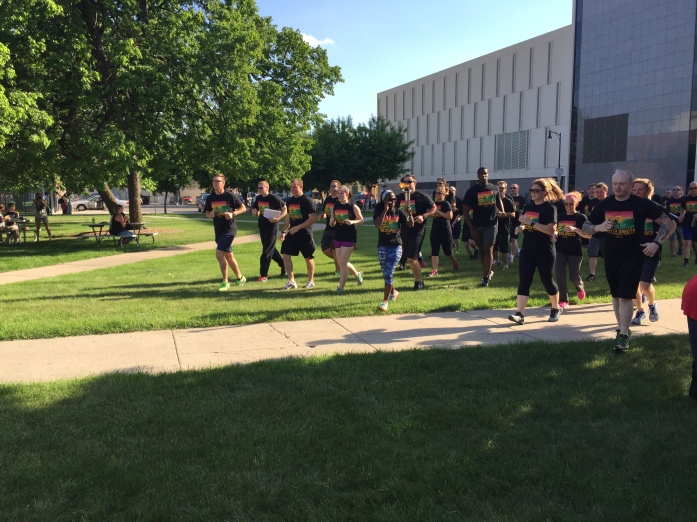 We got chills with the amount of energy and excitement we felt.  Next, it was the athletes’ turns. Each were grouped by county holding a flag representing that county, dancing and cheering.

They were so excited I couldn’t help but smile and feel the same.  They gathered together outside the center cheering, mingling and dancing to the music.

It was time to go inside for the lighting of the flame with Adam Maresh, the Special Olympics Male Athlete of the Year.  The National Anthem rang through the center right before they said the Special Olympics Oath followed by speeches from the mayor and members of the board.  They made a special shout out to the 3,000 volunteers throughout the year that make the games possible. 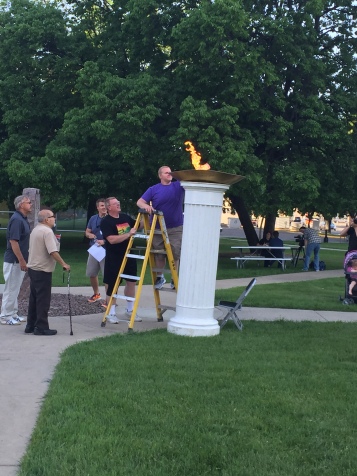 We were beyond thrilled for what the next two days would bring them.  Hopefully victory with less heat! It was over 90 degrees here today. A quote that resonated with me was from the Special Olympics Chairman of the Board when he said, “When we are unified, we are stronger, more just and more joyful as communities as nations and as a human race.  Let’s make these changes together.”  This occurred days before the shooting in Orlando and I think this statement holds very true.  As part of the Gypsy Givers’ mission, we are certainly trying to do our part in mending this country together, as small or large of an impact as it may be. 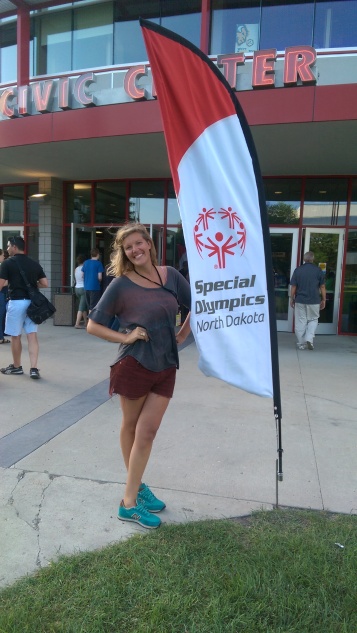